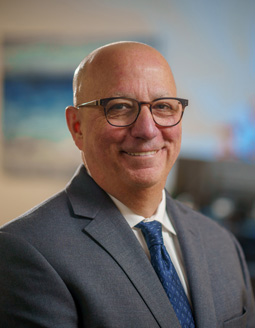 Attorney Daniel M. Morrin was born and raised in New York City, NY. After graduating from the State University of New York at New Paltz he attended Hofstra University School of Law from which he graduated in 1982. In 1983 he joined the law firm of Pasternack Popish and Reiff, which concentrated in Workers’ Compensation and Social Security Disability claims. Mr Morrin was a partner at that firm from 1992 until 2008.

Throughout his career Mr. Morrin has served as counsel to 1199/SEIU in New York City and Long Island, advising its members about Workers’ Compensation matters. 1199/SEIU is one of the largest health care employee labor unions in the country. Mr. Morrin is routinely asked by the 1199 union to go into nursing facilities and hospitals to speak to health care workers about their rights regarding work-related injuries.

Mr. Morrin has vast experience litigating all types of complex Workers’ Compensation matters, including uninsured claims, death claims, and occupational disease claims. He has also appeared at numerous Social Security hearings throughout his over thirty years of practice.

Mr. Morrin is a past Editor of the Brooklyn Bar Association newspaper, “The Barrister,” and has lectured on Workers’ Compensation matters to numerous organizations, labor unions and bar groups.

Mr. Morrin was featured in a New York Daily News article in 2001 about a bus driver who was injured at work. Despite being injured at work while acting as a “Good Samaritan,” the employer denied the bus driver’s claim for Workers’ Compensation benefits. The bus driver then retained Mr. Morrin, who litigated his claim and was ultimately able to obtain benefits for his client.

In 2011 Mr. Morrin started his own law practice on Long Island. He has been appearing at the New York Workers’ Compensation Board and before the Social Security Administration for over 30 years. Mr. Morrin is dedicated to working for the injured and the disabled to assure that they receive the benefits to which they are entitled. He is proud to have represented thousands of workers throughout his long career.